The second half of 21st century might as well be the Afro-Asian century. We would need to gear for it. 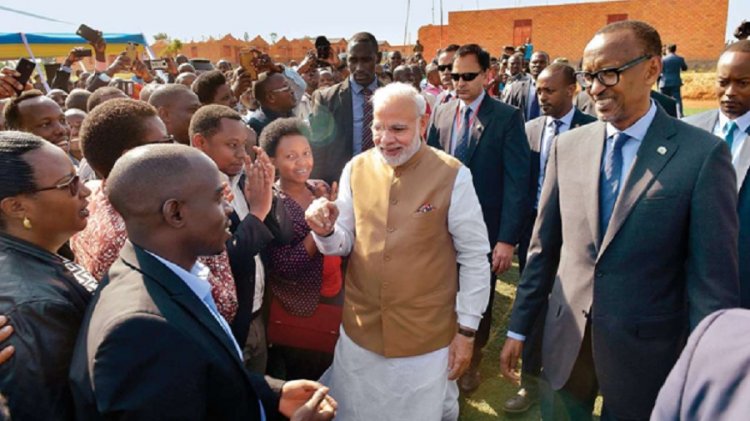 Our relations and contacts with Africa have been umbilical to say the least. Africa is close to us and very important too is a given. Has it acquired salience remained debatable for quite some time despite the best intent of the successive post-independence Indian governments? Until recently the high-level exchanges and visits from Indian leadership have been few and far between leading to a perennial retort from the African leaders, who on their own made umpteen efforts to galvanise the momentum of the respective bilateral relationship. Pandit Nehru was the one who had gone to several countries in Africa as India became the beacon and bulwark for their fight against colonialism. This and the presence of an industrious and successful diaspora created a critical mass of trust in Indian goodness and continued support despite herself being a developing country. India’s non-intrusive and “Share and Care” approach militated against the erstwhile colonial transactional heft. Although the “Cheque book diplomacy” of China and its faster delivery mechanisms provided it a temporary edge the Africans are beginning to understand its real import which is not necessarily benign. Adverse consequences, racial prejudices, loss of strategic autonomy, debt traps and neo-colonial mindset of China is beginning to act a s a wakeup call for many countries on the continent. While China has been singularly responsible for the spread of the Corona virus fortunately the African countries have been less affected. But India rose to the occasion and through its ever  ready assistance and capacity building mechanisms has retrieved the good will that needs to be further entrenched in mutually beneficial outcomes .

For long we have had interactions with African countries but a real focus and strategy for the Continent has been missing until recently. Ad-hocism can not take us too far when the interactive space is being crowded . One can easily witness the Africa focussed approaches of China, UK,  US, France, Japan, Russia , Germany , EU including Israel and Jordan let alone some gulf countries . Happily India has enunciated an Africa policy for the first time which entails the dictum “ Africa for the Africans by the Africans” and India stands with them .

It was during the visit of Prime Minister Narendra Modi to Kampala in 2018 when during his address to the Ugandan Parliament he postulated his ten Guiding Principles for Engagement with the continent and bilaterally that underscores “Africa is among top priorities for India and momentum of cooperation will be sustained through regular exchanges ;development partnership as per African priorities; preferential access to Indian markets for African products; assist in harnessing digital revolution in Africa ; improve Africa’s agriculture potential; fight climate change together; work together to keep oceans and maritime lanes free for all; Africa instead of becoming a theatre of competition should become nursery for its youth; and aspire and work together for a  just , representative, democratic global order.” These are ideal, achievable and collaborative policies that dictate a paradigm shift compared to other big powers who are trying to get into the ‘Gold Rush’ for exploitation by way of neo-colonialist approaches.

There has indeed been a greater focus on Africa, perhaps driven by the extensive Chinese embedded outreach, that institutionalisation of the relationship with the Continent began in 2008 when the first India-Africa Forum Summit was organised. During the 3rd IAFS in 2015 all 54 African Heads of States were represented. It had set high goals and PM Modi announced a package of concessional credit of US$ 10 bn, grants in aid of US$ 600 mn and 50000 slots for capacity building training and higher education over the next five years. India has already extended 180 LoCs amounting to $ 8 bn to over 40 countries. Several targets have been achieved. The 4th IAFS was to be held this year in an African country but due to Covid -19 seems to have been delayed. This indeed will have more exuberant and ambitious objectives especially as India has bridged the deficit of high-level visits to the Continent. In fact, unprecedented level of engagement with over thirty visits of President, Vice President and PM to Africa have taken place which includes to a large number where no Indian leader had gone before. No doubt the government deserves credit for the heightened engagement which is so very essential especially as India looks to play a much larger role in global and regional affairs. Like NAM (Non-Aligned Movement) the India led ISA (International Solar Alliance) has found amazing response from the African countries who are blessed with solar energy almost the year around. India is seen as a reliable partner and trusted friend by most African countries but delivering on promises made remains the litmus test. In this quest opening of 18 New Indian Missions will go a long way if they are properly manned and motivated.

African countries have decided to work on closer integration and have already developed their Vision 2063 and signed African Continental Free Trade Agreement (AfCFTA). This will give them better negotiability advantage with the external powers, leveraging their own resources for their own development to the extent possible by dismantling artificial barriers within  and by adopting clear sighted practical methodology to achieve the continent- wide objectives. This clearly shows that Africa means business not on the terms dictated by others but by self-exploiting their advantage and interests as the fulcrum for engagement. No doubt huge challenges due to historic reasons are intrinsic but they intend to address these head on hopefully in unison.

Now that India has clearly articulated its Africa policy through the 10 Guiding Principles new strategies have to be evolved to deal with the changing reality. We have significant diaspora presence which is highly successful and well regarded and ought to be brought on board as bridges for effective engagement. Indian missions can play an important role in expanding the circle of India friends in the countries they cover through specified interactions. While bilateral engagements are going on for executing various big infra projects and security related  trilateral mechanisms like the Asia Africa Growth Corridor with Japan and with UK , France, Germany  and USA need to be stepped up in creating sustainable self-reliance and resilient partnerships with the African countries. Recently UAE and Israel have signed a Peace Accord. Both have their strengths and requirements. Gulf countries have been looking for ensuring food security and Israel has good technologies and India has great experience and expertise in Agriculture and allied areas. Hence the three could join to develop mutually beneficial partnerships in Africa to work on common objectives. Moreover, the African countries do not want to incur more debts and hence are not too keen on Lines of Credits and prefer Joint ventures and Grants. They are actually looking for debt suspension, write off or deferrals. Perhaps India could create a critical pool of companies in diverse areas who could be assisted in bidding for viable projects either directly or in collaboration with African Development Bank, World Bank or Regional developmental institutions. India is soon joining the UNSC and will take over the Presidency of the G20 in 2022 which could provide it a requisite multilateral leadership role to work for further engagement with Africa.

Education and exposure in Africa have risen exponentially. People do not want mere platitudes and high-sounding statements they demand more from the countries their leaders intend to deal with. They realise that there are no free lunches and no one comes to them out of altruism. Transaction is the buzz word. Trust has been decimated by their colonial and neo -colonial experiences and racial abuses. They will surely engage more with those who think more for them. A qualitative change in strategy with a futuristic outlook is needed. The second half of 21st century might as well be the Afro-Asian century. We would need to gear for it.

Ambassador Anil Trigunayat served as India’s ambassador to Libya, Jordan and Malta. He is the member of the Usanas Foundation’s advisory board and a distinguished fellow at Vivekananda International Foundation.

Usanas Foundation presents "Quad and Quad Plus Dialogues" which will feature expert...