Kashmir Needs to Shed the Political and Cultural Legacy it Inherited from the October 22, 1947: Pakistan’s First Jihadist Onslaught on Sufi Kashmir

To revive itself, the mainstream politics need to show character and competence both, instead of blaming Delhi for everything 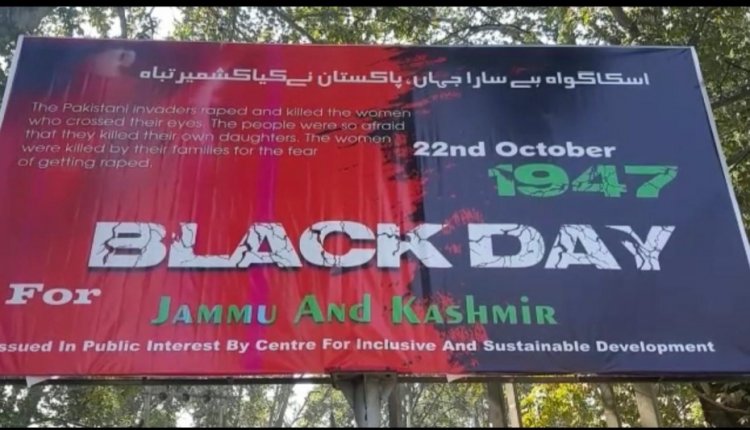 It was October 22-23, 1947 when people of Jammu and Kashmir faced a stiff challenge to protect their culture and identity in the face of the attack carried out by the Pakistani tribal (and irregulars) raiders. The people swiftly made a choice and came out on the streets shouting “Hamla-awar Khabardar, Hum Kashmiri Hein Taiyaar (Beware O raiders; we Kashmiris are ready to fight you)”. But alas this is not an issue that was settled once and for all.

Lately, the critical questions of culture and identity (who they are and what they want to be) have once again been brought into the foreground of their (Kashmiris) political consciousness. But unfortunately, it is seemingly not a cause of concern when it should have been a major one. Maybe someone among the involved parties should try to think as to what has gone wrong and why is Kashmir today once again at the same crossroad of confusion as it was in October 1947. However, the big question remains who should be blamed for not being able to change the psycho-dynamics of Kashmir in the last 73 years.

The present and the future

“Justice without power is impotent; power without justice is tyranny.” This is what the mainstream political leadership, or for that matter, even the separatists, have been told loud and clear by the emergent political situation here for more than a year now. But, as has always been the case -- explanations are being invented and blames directed at the ‘political other’ to wriggle out of the current imbroglio. This ploy may or may not work, but real wisdom lies in accepting the defeat and failures with humility and acknowledging one’s follies that have brought things to this pass.

Needless to say that talking about the machinations and other disqualifications of the ruling dispensation at the Centre to shift the focus from our own shortcomings, even in the best of possibilities, has only a limited chance of striking a chord with the common masses. Overconfidence about one’s own power or capabilities without giving a damn to the public sensitivities and sentiments have cost Kashmir's entire leadership not only its political arithmetic but the face as well. Now it remains to be seen how this political class – even in the latest amalgamated form -- articulates and surmounts its current challenges and past debacles, which, it goes without saying, springs primarily from its own “arrogance of power” than resulting from anything triumphant BJP may have engineered.

Political prudence demands that instead of fanning the fires of regionalism and parochialism, the mainstream parties here must take it as a beginning of yet another opportunity to translate promises and pledges (read political rhetoric) into practical action.  Further, mainstream politics need to lend itself the character, poise, and position of a powerful regional player representing the regional aspirations. Unlike in the past, they should not just be content playing second fiddle to some national party, a practice that Kashmir has rejected time and again.

How the new political amalgam fares on its promises and pledges from now on will largely determine not only its collective future, but also that of its individual constituents. The choice is with them. They can either choose to enjoy the proud moments proudly and barter away ‘people’s trust’ for the crumbs of power or political limelight, as they have done in the past or they could consolidate themselves by treading on a politically mature and correct path without trying to sell false hopes to the people, or invigorating unreasonable expectations in their hearts.

In ‘The Federalist Papers’, Alexander Hamilton says: “What is a power, but the ability or faculty of doing a thing?  What is the ability to do a thing, but the power of employing the ‘means’ necessary to its execution?” The new political alliance needs to remember that in order to do a thing well, all that is required is power and competence. It needs to learn some lessons from past mistakes that Kashmiri leaders and parties have made, individually and collectively, which is why they have been pushed to margins within no time after losing power and favour.

Until only recently, each of these parties and individual leaders had all the power at their disposal. But lack of competence proved their biggest undoing. Unless power is combined with competence, it is ‘impotent’ and ultimately leads to tyranny. This is what Kashmir has seen in good measure. This is indeed why the people of Kashmir have by now ceased to be enthused or impressed by the loud-mouthed assertions of its political class!

By now, people have attained a fair degree of political maturity – so much so that they are no longer impressed by the hollow claims and slogans of so-called “historic initiatives” and “landmark decisions” or “unprecedented alliances”, and catch-phrases like “fight till death” etc. They are not moved by the so-called ‘sacrifices’ that every single political group here claims to have made for the “peoples’ cause” or vow to volunteer if need be in days ahead. The fact of the matter is that such morality and benevolence actually does not gel with the people’s psychological and experiential landscapes vis-à-vis political leadership.

This place, it must be understood, has grown beyond those “ideological generations” which would be led astray by emotive slogans. Invoking the past contributions and legacies will not help. People are mature enough to read through acts of political deceit and unruly arrogance. They know how to differentiate between the chicken shit and the chicken salad.

Lessons for the political class to learn

Those undermining people’s intellect and political wisdom must have learnt their lessons – but not in the way we might think. Let’s see what are the inferences they draw, and then, if and how the same is translated into the corrected political behaviour.

The author is a youth activist and co-founder of Srinagar based independent think-tank, Jammu and Kashmir Policy Institute. He can be reached at touseefraina@gmail.com

Healing the Wounds of Kandahar and Kabul: Searching for Peace in Afghanistan

Erdogan’s Expansionism and Pakistan’s Jihadism in the Caucasus: Undertaking the...