Superpower with Chinese Characteristics: Decoding the actual capabilities of China

Is China's projection of its status as a rival to US, a masterfully crafted myth, just like its mythical dynasties ? 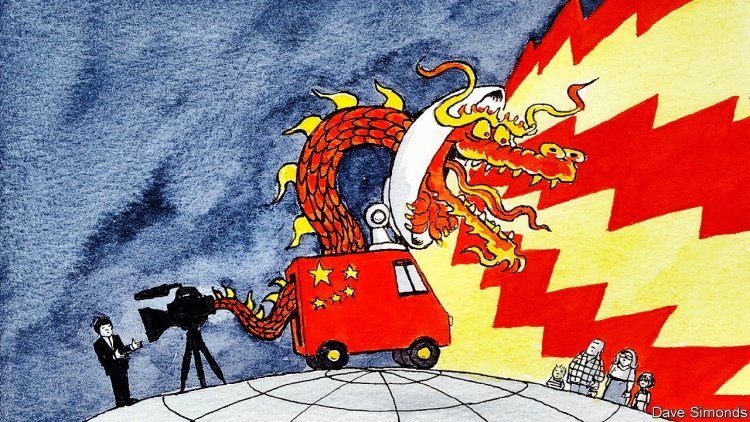 On October 6th, 2020, soon after the most crucial meeting of Quadrilateral Security Dialogue( QUAD) between the countries Japan, India, Australia, and the United States, the Chinese English daily, Global Times, known for its penchant for picking on squabbles, reported on the outcome of the Quad meeting as “India is unlikely to take the U.S. side. It has been buttering its bread on both sides of major power games ever since the Cold War. India is a country that tends to have higher confidence than its actual strength. Also, New Delhi wishes to become a superpower itself with strong nationalism in its public opinion. Therefore, it has no intent to dance to the U.S.’ tune.” The language employed by the G.T. Reporter, as usual, was no short of an ill-tempered distasteful flare; but most importantly, it reflected the language and arrogance of a ‘Han chauvinist.’

The Author Shen Yi mentioned that India likes to butter both the “major power,” which, as usual, reflects the Chinese Communist Party’s ‘Middle Kingdom’ vanity of assuming the world revolves around them. Shen Yi described India as having overconfidence about its capabilities, so here we are to unveil the actual strength of the Communist regime.

From the Covid19 outbreak, we know the Chinese research institutes are reckless with the Bio-safety lab’s code of conduct, and their health care system is inadequate. China, which has failed to take responsibility for the Virus that originated in its soil, reportedly infected the world, and ran amuck with no shred of responsibility. Thereafter, when confontred with legitmate allegations about its role in spreading the pandemic, acting like a bully, it threatened states with sanctions and made incursions into  foreign territories, giving a glimpse of the world order  with Chinese characterstics.

The Myth of Great Power rivalry

Paradoxically, the country which sends the largest number of students to the United States assumes it is in a ‘power rivalry’ with the United States. CCP’s China is not ‘an equal’ to the U.S. to be delving into the “Thucydides Trap,” for it is the largest country that sends students to the United States at a staggering 33percent, of which 53 percent got U.S. citizenship as of 2018. Of the 12 million Chinese living outside China, roughly 27 percent live in the United States. American students do not look elsewhere(outside) for scholarship or education opportunities at this scale; it connotes that they have the best academic and research centers of higher learning. International students in the United States cherish academic freedom and space given to them, unlike the repressive academic environment in China, where every research article, journal, and dissertation go through the Forbidden city walls of censorship, and any political debate is prohibited.

Chinese scholars equate the trade spat between the U.S. and China as the new ‘Cold war,’ America’s ‘Sputnik moment 2.0’, such an analogy defies logical analysis and camouflages the unfathomable true nature of the Chinese economy and education system, which are not just inadequate but utterly dependent on the United States. This dependency is not a sign of a ‘major power’ but a lizard masquerading as dragon. A report published by Japan’s National Institute of Science and Technology Policy concluded that China ranks number one in terms of the highest number of academic papers published in Natural Sciences, surpassing the United States with a staggering margin of 24,440 papers. Indeed, China has achieved tremendous success in the field of Science and Technology, but not without help from the West. For example, the Wuhan Institute of Virology, under the Chinese Academy of Sciences, was born with technical and institutional assistance from the French and expertise from Americans. Could the Chinese have achieved the Rank One position in scientific publications, without the data mining of Western researchers and research pool (brain drain) of young international scholars through its Thousand Talents Program and Talented Young Scientists Program under the National Natural Sciences Foundation of China?

The unauthorized clandestine transfer of classified technology by Chinese scientists on the United States soil can be traced back to Qian Xuesen or popularly known in the scientific community as Dr. Tsien. In 1955, Dr. Tsien was deported by the United States after being caught leaving for Hong Kong with nearly 816 Kilograms of books, materials, papers on rocketry, and space physics. As suspected by the Federal Bureau of Investigation, upon return to China, he became a Communist party member. Interestingly, Dr. Tsien's present day successor, A.Q.Khan, who stole nuclear technology from European Uranium Enrichment Centrifuge Cooperation, came from Pakistan, China’s best friend and a major partner in crime. After all, the scientific knowledge, design data, and skills that Dr. Tsien acquired and perfected in the U.S made him the father of China’s Ballistic Missile Program.

Moreover, one must be highly ignorant or delusional to assume that the Science and Technology  Institutes in china were established to serve humanity. The Communist neo-authoritarian state is no different from Nazi Germany, where material science was a tool to suppress, subjugate masses, and utilize in modern warfare. It is a perversion of the very foundation and purpose of scientific research and inquiry; it is a ‘Kriegerische Mathematik moment’ rather than a sputnik moment, i.e., China replicating the Nazi war book where wars are a business of Scientists, Mathematicians, and Engineers.

Furthermore, the Communist Party of China will never disclose that the high-speed rail technology they so vehemently are flaunting and pitching the Russians, Mexicans, Indonesians, and Americans, reportedly, is a product of thievery, i.e., reverse-engineering the Japanese high-speed rail technology. They started erecting bridges and rail networks with World Bank funds and assistance from Japanese, French, and the United States. In 2019 alone, China borrowed USD 1 Billion to 1.5 Billion at a low-interest rate from the World Bank. This loan will be granted annually until June 2025, under the umbrella of the ‘Five-year lending strategy.’ Despite opposition from The United States Treasury Secretary Steve Mnuchin, the loan was sanctioned to China with the pretext of developmental and environmental reforms. It was made possible through the Chinese Trojan horses ‘The Manchurian candidates’ installed at the top positions in the World Bank by China.

During the cold war, the intensity of the animosity between the United States and the Soviet Union was so high that the exchange of students, economic interdependence, or any technical assistance between them was highly impossible and unthinkable. Unlike the Cold war theatres where the Soviet Union had an established Warsaw pact to counter the Western alliance overtly and Comecon to counter the Marshall plan, CCP’s China is just wallowing in the World Bank loans, and the Foreign Direct investment coming in through Hong Kong, the Chinese middleman and intermediate for Western capital flow into Guangdong.

One wonders what kind of superpower or contender it is to seek International aid through the World Bank’s developing nation’s concessional loan program. Is China a rival and an equal? China certainly is a threat to international fair practices of trade, free and fair internet, freedom of speech, and the universal declaration of human rights, hence aptly described by many as the “Frankenstein’s monster” created by Americans when they opened their World Trade Organization gates in 2001 for the Chinese entry.

On the one hand, the Chinese Wolves demand power-sharing with the United States on Twitter. On the other hand, they implore the WTO not to graduate their status from ‘developing’ to ‘developed.’ Similarly, the Communist party boasts its legitimacy through economic prosperity and propagates its neo-authoritarian communist model as the best form of governance, yet flagrantly seeks elevation from ‘non-market economy’ to ‘free-market economy’ status at the WTO. Such audacity, mendacity, and duplicity are the embodiment of a superpower with Chinese characteristics. It is the only emerging superpower which avails the concessions given to developing countries in technology transfer and assistance in technical know-how sends its students to the United States to pursue higher education and dares to seek parity with the United States. The very fact that the Chinese aggression at the Himalayan region, Galwan valley intensified at a time when American capital was touted as moving out of China to Vietnam and India is a testimony to the fact that the Chinese fear an economic decoupling from the United States, as it would destabilize the Communist regime; and paranoid over a possible Indo-American coupling. It is a super-dependent power with failed, weak and rogue states in its pocket(Belt and Road Initiative and Loans) to the bandwagon and cheer. China’s behavior is that of a toxic girlfriend who refuses to be disciplined, fall in line, and let go off. China’s peaceful rise strategy was a camouflage for deception, expropriation, and larceny  (Intellectual property theft). Although China enjoys a monopoly as the world’s largest supplier of rare-earth metal, it is far behind South Korea, the United States, and Taiwan in chipset technology and semiconductor industry.

Anxious over the 2+2 ministerial dialogue, the Chinese Communists today will sanctimoniously warn the Indians of aligning with the United States. The Communist offensive-propaganda piece, Global Times, recently called the Indian weapons system as ‘ incompatible’ with the United States intelligence pact, conveniently disguising their incompetency with the psy-op strategy of ‘Hao Kan’(good looks/appearance).

Should the communist who allowed the ideological opponents, Western capitalists to abuse the natural resources of China without a cap and human resources without a labor protection mechanism, be advising India of strategic autonomy, neutrality, and Non-Alignment?  Paradoxically, the communists claim legitimacy over such prosperity, which resulted from the exploitation of its citizens by foreign agents(MNCs). India absorbed the low-carbon footprint service industries outsourced by the Americans, while China turned into a sweatshop for the American capitalists. India has always been cautious in its engagement with the United States, and its measured engagement is often derided as timidness by the Chinese.  Be it the Indo-US nuclear deal, Indian Nuclear Liability Act, Doha trade negotiations at the WTO, European Union’s carbon tax, and U.S.’s carbon limits, India has never shied away from standing up to the discriminatory practices of the West. Instead, it has been the torchbearer of the Global South in a rule-based international system. Unlike India, which weans civilizational influence, resorts to an ethical, principle-based liberal system, the Chinese view material prosperity as the only criterion for a Superpower contender. Thus, the Global Times article only reinstates the fundamental philosophical differences between Communist China and a Dharmic India in assessing power.

Communist China is also a unique emerging superpower with hallmark CCP characteristics, i.e., vanity.  It is the only power to have been economically vulnerable to the status-quo power, highly dependent on the status-quo power for technical expertise, yet despite its incompetency in indigenous growth, it has claimed parity with the established power.

To conclude, when Shen Yi states, “a country that tends to have higher confidence than its actual strength,” he insinuates CCP’s China.

Maitreya is a Sinologist.

Some thoughts on bringing India upwards - even faster. A starting point for these...