On 1st April 2021, Usanas Foundation organized an online panel discussion on the topic, “Is Xi Jinping’s covert Myanmar strategy the cause of China’s involvement in the coup d’Etat?”. The webinar sought to explore Mr. Frank Lehberger’s paper which examines the role of China and its covert strategy under Xi Jinping in facilitating the recent Coup attempt in Myanmar. 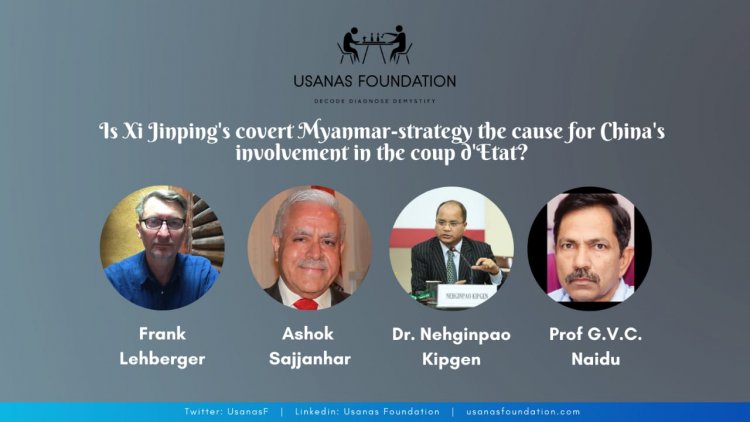 Usanas Foundation is a geopolitics and security affairs organization based in India, registered under Section 8 of Companies Act, 2013, as a non-profit and a non-government organization.  On 1st April 2021, Usanas Foundation organized an online panel discussion on the topic, “Is Xi Jinping’s covert Myanmar strategy the cause of China’s involvement in the coup d’Etat?”. The webinar sought to explore Mr. Frank Lehberger’s paper which examines the role of China and its covert strategy under Xi Jinping in facilitating the recent Coup attempt in Myanmar. The panelists were Mr. Frank Lehberger, the author of the paper and a Sinologist, political analyst, and expert China watcher. Mr. Ashok Sajjanhar, former Indian ambassador to  Kazakhstan, Sweden, and Latvia, Professor GVC Naidu, the former founder-chairperson of the Centre for Indo-Pacific Studies at Jawaharlal Nehru University and lastly, Dr. Nehginpao Kipgen, Professor and Executive Director of the Centre for Southeast Asian Studies at OP Jindal Global University. The event was also attended by eminent experts like Mr. CD Sahay, Former R&AW chief, Mr. Vijay Nambiar, Former Indian permanent representative to the UN and Deputy National Security Adviser to the Government of India and Head of the National Security Council Secretariat. He was also UN Secretary General's Special Advisor on Myanmar. Then, Mr. Krishan Verma former Special Secretary in the Cabinet Secretariat, and Ambassador Neelam Deo, former Indian ambassador to Denmark and Ivory Coast and is currently director of the Gateway House.

Mr. Abhinav Pandya, CEO and founder of Usanas Foundation began the webinar by welcoming all the panelists and congratulated Mr. Frank Lehberger for writing an important brief on a critical subject like the point of the webinar’s discussion. He further said that the world is back again into the age of concentration camps, where it exists now in Xinjiang and Tibet and the realist interpretation of international relations as the world is witnessing the rise of alliances again like the Quad which can soon turn into a military alliance. Lastly, he spoke about the past developments in Myanmar.

The first speaker at the webinar was Mr. Frank Lehberger, He opened the webinar by stating that in the initial phases, right after the coup took place, there were no severe repressions by the military forces in Myanmar. Protesters who could not stand the mockery of democracy poured out onto the streets and organically came together to hold civil disobedience movements. Rallies were held and roads were blocked. but they remained peaceful. Things soon took a turn for the worst as Myanmar’s security forces began using military tactics and live-fire rounds against the largely peaceful protesters, which led to a sharp increase in casualties.

China repeatedly denied any connection with the coup and ongoing violence. However, according to Lehberger’s research, several circumstantial occurrences point towards China’s involvement in the coup. One of the examples used by Lehberger was that precisely three weeks before the coup, a high-level Chinese diplomat flew to Myanmar and met with a military official that was later revealed to have been behind the coup. The meeting was strange as a Chinese diplomat under normal circumstances would not meet with a military general who is not his counterpart.

Also, there were suspicious troop movements made by Chinese forces on or near the day around the Sino-Myanmar border that the coup took place. As per Lehberger, the People’s Liberation Army moved 12,000 combat troops towards the border. The actions by the PLA indicate that the Chinese had at least some prior knowledge about the coup by the military. The justification that China later gave to the world was that the troops were moved for a humanitarian mission, but Lehberger finds that excuse extremely flimsy as one does not require fully armed combat troops with jet fighters to conduct humanitarian missions.

Lehberger also stated that following the coup, clandestine commercial flights were flown between China and Myanmar and that these flights carried military equipment such as tanks and small arms to Myanmar from China. China provides roughly 80% of Myanmar’s military hardware. At this point, Lehberger comprehensively explained Chinese interference in Myanmar and the strategy of the new government in Myanmar. He added that under the leadership of Xi Jinping, China and the CCP are regressing and becoming more aggressive in their actions. Xi Jinping’s goal is to make China a superpower by 2025 and the sole superpower in the world by 2049. To achieve this, he is re-introducing Maoist and Marxist ideologies into the Party as well as the general populace.

Lehberger then went on to explain how China’s Belt and Road Initiative is simply a debt trap that is meant to ensnare smaller countries so they can be slowly strangled. Through the strategy of trapping countries in a vicious cycle of debt, China slowly brings these countries under its influence. Myanmar is no exception. Myanmar is strategically important to China because, through Myanmar, China can secure another entry point to the sea and bypass the Malacca Straits. Quoting China-Myanmar Economic Corridor (CMEC) as one of the important factors behind the Chinese influence in Myanmar, he argued that CMEC has experienced a rocky history of stops and starts in the past. The corridor that plans to connect the Indian Ocean’s oil trade with China’s Yunnan Province will address China’s internal development priorities, the strategic vulnerabilities of its oil supply, and its competition with India.

“The CMEC aims to substantially improve China’s overall geopolitical stance and improve China’s connection to Southeast Asia. The CMEC represents how BRI projects in Southeast Asia support core Chinese interests. The underdeveloped Yunnan province in Southeast China stands to benefit greatly from the economic corridor. Which is why China is aggressively pushing for the CMEC”, he added.

According to Lehberger, China wants to divide and conquer. They want to divide Northern Myanmar and ‘Myanmar Proper’. China aims to provide Myanmar support and funds and use it to manipulate the country until Myanmar accepts China as its natural overlord. In October 2018, Xi Jinping convened a closed-door meeting about the situation in Myanmar. This showed the importance of Myanmar in the eyes of China. Xi Jinping views Myanmar as a personal security zone and the stability of Myanmar is a matter of China’s national security. It is Beijing’s goal to prevent being surrounded by democracies to limit the influence of the west in the region.

The next speaker at the webinar was Ambassador Ashok Sajjanhar. He began his address by congratulating Lehberger on an excellent paper. After which he added that China has huge strategic interests in Myanmar and that while there was no solid evidence of China having a hand in the coup in Myanmar, there was a lot of circumstantial evidence that hinted towards Chinese involvement.

Sajjanhar added that the aspect that surprised the military Junta in Myanmar following the coup was the staunch and popular opposition to it. People took to the streets to protest the mockery of democracy that was being made. According to Sajjanhar, the Myanmar military views itself as the protector of the country and feared losing its prominent position and power following the latest election. The military could not even imagine not having a prominent role in the politics of Myanmar. China had referred to the coup in Myanmar as a mere “cabinet reshuffle”. However, this was far from the truth.

In conclusion, Sajjanhar stated that Myanmar is not only important for China but also for India. Since the North-East is cut off from the Indian mainland, Myanmar plays an important role in its economic growth. Sajjanhar finally added that ASEAN has a responsibility to step up and take cognizance of what is happening in Myanmar. Only when it takes tangible actions can ASEAN gain more confidence in itself and increase its legitimacy.

The next speaker at the webinar was Professor GVC Naidu. Prof. Naidu began by stating that in Myanmar civilian rule was slowly getting solidified and the military was being increasingly marginalized. This led to fears within the military that they would lose their position. This rising fear led to the military junta taking the drastic action of launching a coup in the country.

Prof. Naidu added that Myanmar is blessed with abundant natural resources, is in a strategic location, and also provides access to the Bay of Bengal. China also has a large border with Myanmar and due to the previously listed reasons, it is very important to China. China has tried to be a great ally to Myanmar in the recent past and has provided Myanmar aid and resources. Prof. Naidu added that there are a lot of disadvantages to leaning on China but Myanmar does not have a choice. The China-Myanmar Economic Corridor is becoming increasingly important for China and the air and road connectivity between the two countries are also improving. In conclusion, Prof. Naidu asserted that while China was in some way involved in the coup in Myanmar, its role has somewhat been exaggerated. He also added that India and ASEAN must condemn the actions of Myanmar’s military.

The last speaker at the event was Dr. Nehginpao Kipgen. According to Dr. Kipgen, Myanmar and China have a long history of cooperation. Myanmar was the first non-communist country to accept the legitimacy of the People’s Republic of China government. He further said that subsequent governments of Myanmar have been engaging with the Chinese government and mentioned the visit of Aung San Suu Kyi to China and her meeting with the Chinese President and the Prime Minister.

He then argued that one of the biggest concerns of China is having a stable government in Myanmar, be it the military Junta or a democratically elected government. According to him, the Myanmar military has been very fearful and anxious about losing its power and prestige. It cannot comprehend a system where the military would be under the control of a civilian administration. Therefore, a coup by the military was inevitable, even without support from Beijing. Lastly, he added that to China internal stability of Myanmar is extremely important because it is worried about the possibility of there being refugees from Myanmar.

Abhinav Pandya, CEO of Usanas Foundation closed the webinar by thanking all the speakers and audience for the participation.

Disclaimer: All opinions expressed in the Webinar belong to the speakers and are not reflective of Usanas Foundation. 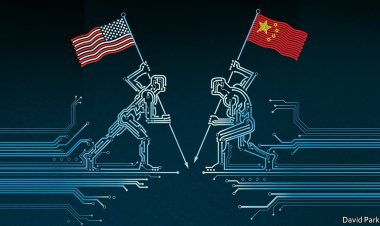 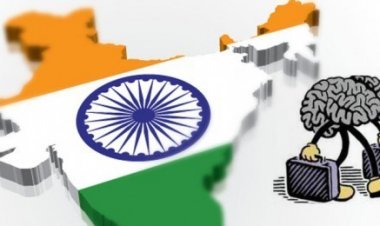 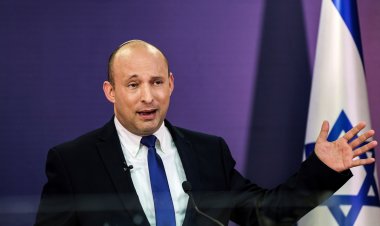 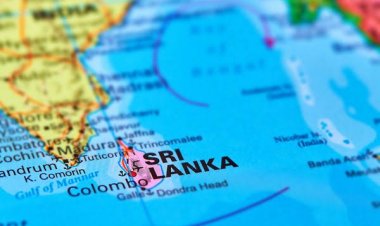 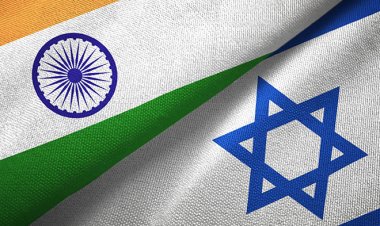 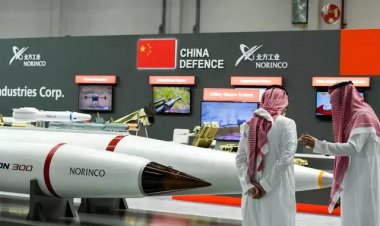 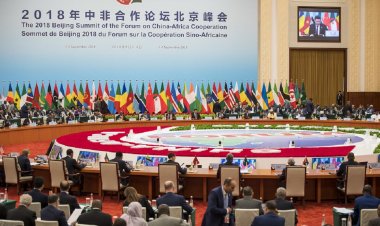